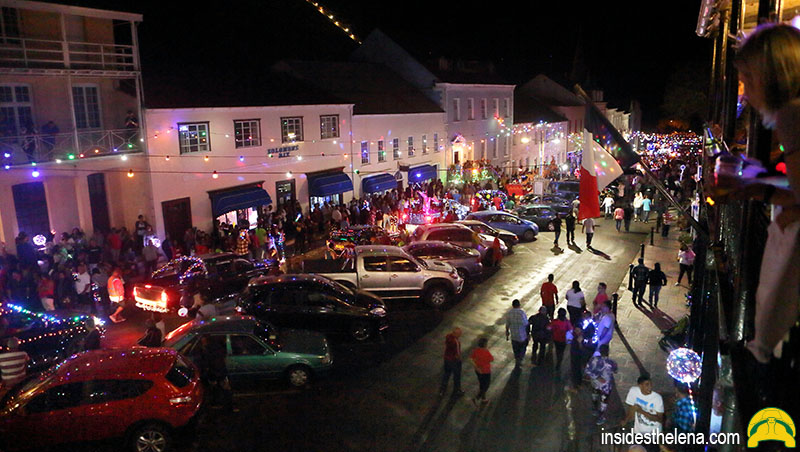 Dancing angels on a darkened Jacob’s Ladder was the highlight of tonight’s annual Festival of Lights in St Helena.  The showstopper drew gasps and “ahhhs” as eight, ethereal angels with illuminated wings performed an enchanting dance routine, a third way up the iconic Ladder.

And that wasn’t it, the finale was a 10-minute fireworks display that literally ended the night with a bang.

Under the Umbrellas & Balloons

These delightful displays followed what was, another spectacular Festival of Lights Parade organised by Jamestown’s, Pilling Primary School.  A dazzling procession of lights designed to get people into the Christmas mood.

The street parade started after dusk (7.30pm) from the Hospital at the top of town with a number of fabulously lit floats and cars, and around 200 – 250 people draped in lights, many carrying illuminated umbrellas and helium balloons that added to the colour spectrum.

There was a Santa climbing a chimney, sleighs and reindeer, candy canes, a dancing Chinese dragon, Christmas trees, Bumblebee the Transformer, Father Christmas’, fairies, Mother Christmas’ and a wizard.

Three astronauts and a rocket was Pilling Primary’s float, depicting the 50th anniversary of the first manned moon landing, an event the school celebrated back in August.

Hundreds of People Filled The Streets

Music blasting from floats and car speakers kept hips swaying or toes tapping all the way down to the Grand Parade at the bottom of town.

The Festival of Lights has become one of the island’s most anticipated events that attracts hundreds and is enjoyed by all ages. Totally worth the trip into town and the hassle of searching for a parking spot.  Even those who parked a long way up on Side Path road!

The Festival of Lights History

This new Christmas tradition began in 2012 and was the brainchild of Elaine Benjamin, head teacher of Pilling Primary.  This year’s dancing angels were also her idea, one that came in a dream.  “I woke up and thought yes we’re going to do that,” she told ISH.

“Off course we couldn’t use the children for health and safety reasons, so we got some of the mummies instead!

“The practices have been hilarious, because each time they had to climb those steps.  So it’s been bit of ‘Keep Fitness’ as well.  It was my idea but the girls made it happen and I’m really grateful to them, they did a tremendous job.”

See report from Festival of Lights 2016 by WTSDN

Nicole Richards was tasked with the choreography. “Pilling Primary always try to keep it fresh and come up with a different surprise every Festival of Lights,” she told us.

“We used the wings that were used in the Carnival a couple of years ago and put some lights in them.”

Practice started in December, three times a week.  “Obviously rehearsals on the ground is very different to up there on the Ladder,” said Nicole.  “We had a couple of occasions when it was really windy and we couldn’t even move our wings!

“We had support from a lot of other people, who came down and switched the lights off.  Yes, a few people have seen this show beforehand, as we had a few night rehearsals and were spotted!”

ISH felt sorry for the mummy who drew the short straw and had to climb the highest up the Ladder!

Getting Everyone In The Mood

This year was the first time for a fireworks display which was sponsored by St Helena Tourism in recognition that the Festival of Lights has become a tourist attraction.

“We don’t take in a lot of money with the collection tins,” Elaine told us, “we usually make about £800-£1,000 at the most.  But, the key objective is to promote our school in the community and get people into the Christmas spirit on St Helena.

The Festival of Lights in St Helena is a wonderful community event, the highlight of the December calendar, making Christmas one of the best times to visit the island.